You are here: Home / Countries / China

POPULATION OF THE CAPITAL: 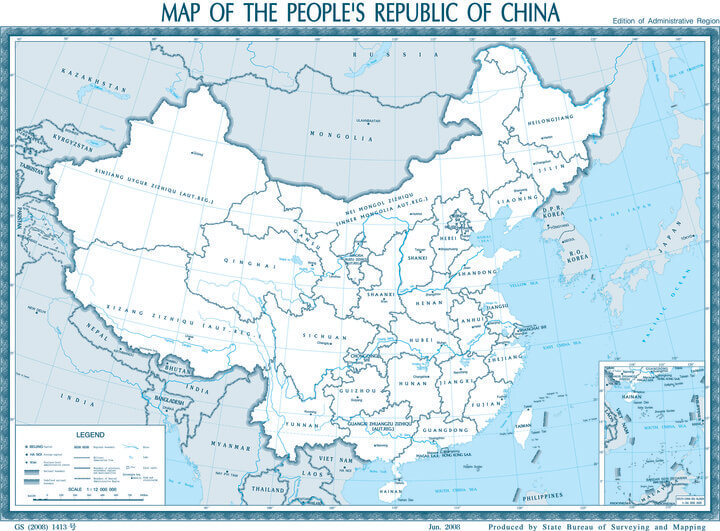 Located in the east of the Asian continent and on the western shore of the Pacific Ocean, the People’s Republic of China (PRC) is a vast country with a land area of about 9.6 million sq km. Its other territorial area, including territorial waters, exclusive economic zones and continental shelf, exceeds 3 million sq km, adding up to a total area of 13 million sq km.

In the southwest of China, Mount Qomolangma (or Mount Everest) is soaring 8,848 m above sea level, the world’s highest peak and the main peak of the Himalayas which is called “the roof of the world”. From west to east, the territory of China stretches from the Pamirs to the confluence of the Heilong and Wusuli rivers, covering a distance of 5,200 km. From north to south, the nation extends from the center of the Heilong River north of the town of Mohe to the Zengmu Reef at the southernmost tip of the Nansha Islands, covering a distance of 5,500 km. The Bohai Sea, the Yellow Sea, the East China and South China seas constitute the vast sea area of China. A total of 5,400 islands dot China’s territorial waters. Their total area reaches 80,000 sq km. The largest of these islands, with an area of about 36,000 sq km, is Taiwan, followed by Hainan with an area of 34,000 sq km.

China’s economy maintains medium-to-high-speed growth, making China a leader among the major economies. Its GDP has risen from 54 trillion to 80 trillion yuan over the past five years, ranking No. 2 in the world. Its contribution to world economic growth exceeds 30%. Now we have shift from the phase of high speed growth to the phase of high quality development. At this critical period of shifting development mode, optimizing economic structure and changing motive force of growth, what is urgent and strategic to our development is to build a modern economic system.

According to the 8th National Forest Resources Inventory (2009-2013), the forest coverage rate in China is 21.63%, forest area 208 million hectares, forest stock volume 15.137 billion m³, and forest vegetation carbon storage 8.427 billion tons. China has 122 million hectares of natural forests with 12.296 billion m³of stock volume; and 69 million hectares of planted forests with 2.483 billion m³of stock volume. According to the Global Forest Resources Assessment 2015 released by FAO, China’s forest area and forest stock volume ranked No. 5 and No.6 respectively in the world, while its planted forests area ranked No.1. Compared with the 7th National Forest Resources Inventory (2004-2008), China witnessed 1.27% growth in forest coverage rate, gained 12.23 million hectares of forests, and embraced a net increase of 1.416 billion m³forest stock volume and 123 million tons of forest carbon storage (See Chart 1). And recent inventory shows that the forest resources in China have entered into a steady development period featuring growth in quantity and improvement in quality. 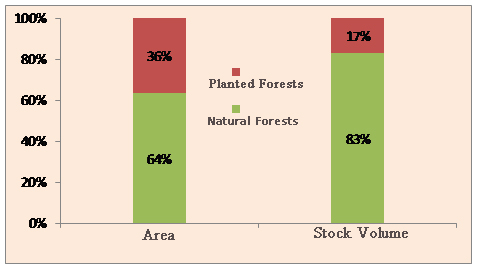 Forest type, age class and tree species respectively reflect the utilization, age structure and types of forest resources and to some extend their quality, function and management.

Based on land ownership, forest land in China is divided into state-owned land and collective land, which are 73.77 million hectares and 117.4 million hectares respectively in terms of forest area, 9.354 billion m³and 5.425 billion m³respectively in terms of forest stock volume. The collective ownership plays a dominant role when it comes to the area of forest land and closed forest land (with 20% crown density or more), which accounts for 60.01% and 61.41% respectively; while state ownership is dominant when it comes to forest stock volume, which takes up 63.29% (Table 1). 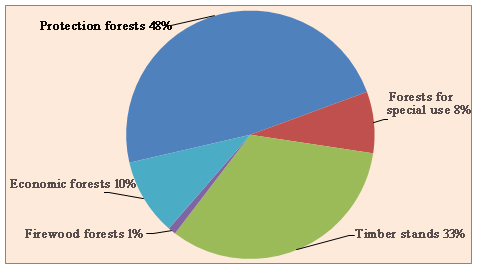 Chart 2 Proportion of the area of different types of forests 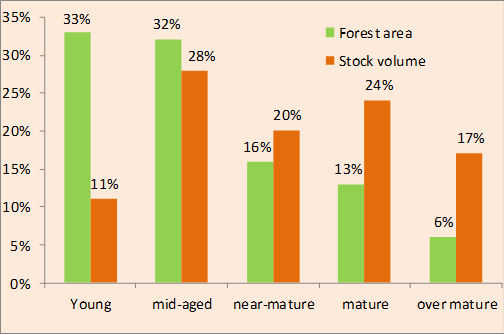 China is rich in tree species. We have more than 8000 woody plants, taking up about 54% of the total in the world. Among all the tree species, arbor species exceeds 2000. According to the statistics of dominant tree species (group) of arbors, the top ten species in terms of forest area are quercus, birch, fir, larch, masson pine, populus, Yunnan Pine, eucalyptus, dragon spruce and cypress, adding up to 86.49 million hectares of area and accounting for 52.54% of the nation’s total. And their stock volume is 7.015 billion m³in total, accounting for 47% of that of the whole nation (Table 2).

The important indicators to evaluate the quality of forest resources include stock volume per unit area, increment per unit area, number of trees per unit area, average DBH (diameter at breast height), average crown density, biocoenosis (or community), tree species, naturalness, disasters and health of arbor forests. As for the arbor forests in China, the stock volume per hectare area is 89.79 m³, the annual average increment per hectare area is 4.23 m³, the number of trees per hectare area is 953, the average DBH is 13.6 cm, and the average crown density is 0.57. Among all the arbor forests, 63% have a complete biocoenosis, 34% relatively complete and 3% simple; pure forests account for 61% and mixed forests 39%; natural and near-natural forests with small human impact account for 4%, while secondary forests or planted forests with bigger human impact account for 96%.

The damage to arbor forests, caused by disasters such as fire, diseases and insect pests, and climatic disasters (wind, snow, rainfall and drought), is leveled into light, moderate and severe. There are 28.76 million hectares of arbor forests affected, taking up 17% of all arbor forests. Among them, 11% are severely damaged, 23% moderately and 66% lightly. As for the disasters causing damage to arbor forests, 51% are climatic disasters, 37% diseases and insect pests, 9% fire, and 3% other disasters. Combining the growth and development of trees with damage of disasters, we could evaluate the health of arbor forests. 75% of them are in good health, while 18%, 5% and 2% are in sub-health, medium-health and ill health respectively (Chart 4). 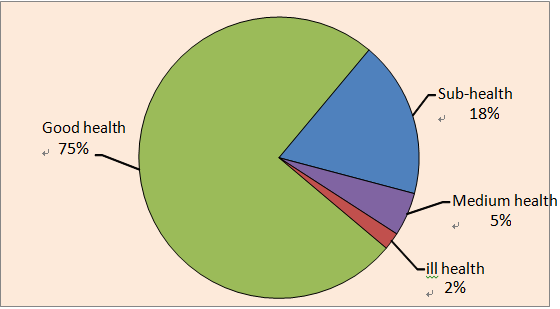 By considering the indicators reflecting the quality of forest resources and adopting Analytic Hierarchy Process and expert consultation method, we evaluate the quality of arbor forests nationwide. Arbor forests with high quality account for 19%, medium quality 68%, and low quality 13%. After comprehensive evaluation, the quality index of arbor forests is registered as 0.62, showing that the overall quality is at a medium level.

Forests have a stabilizing effect on ecological environment such as water and soil conservation, carbon sequestration and oxygen release, climate moderation, clean environment and biodiversity. Considering various factors such as overall forest quality, structure and degree of human impact, we level the ecological function of arbor forests as good, medium and bad. Among all the arbor forests, 13% play a good ecological role, while 79% medium and 8% bad. The average index of ecological function of arbor forests nationwide is 0.55, which means a medium level.

3. Polices, Regulations and Planning of Forestry

Since 1998, China has implemented some key forestry programs, such as the Natural Forest Protection Program; Program on Returning the Grain Plots to Forestry; Program of Managing Sandstorm Sources in Beijing and Tianjin; Key Programs of Shelter Forests in North, Northeast and Northwest China and the Lower-Middle Reaches of the Yangtze River; Construction Program of Wildlife Protection and Nature Reserves; and Construction Program of the Fast-Growing and High-Yield Timber Stands Bases in Key Areas.

China has formulated and implemented a series of important planning of forestry development, such as the Forestry Development Plan during the 13th FYP Period, National Plan of Forest Operation for 2016-2050, Outline of the National Development Plan on Under-forest Economy of Collectively-owned Forests (2014-2020), National Plan of Pest Prevention and Control for 2011-2020 and other mid-and-long term forestry development plans to set a clear direction. China has also proposed to establish an institutional framework for forest management, enacted plans of national forest reserve, carried out the trial of establishing the National Park System and compiling the Natural Capital Balance.

Nature reserves harbor the wildlife resources. They are the most efficient measure to protect the natural and ecological system, sustain biodiversity, and ensure the safety of our species.

At present, a network of nature reserves has been initially formed. It effectively protects 90% of the terrestrial ecosystems, 85% of the wild animal populations and 65% of higher plant populations. It covers 20% of primary forests, 50.3% of natural wetlands and 30% of typical desert areas. By the end of 2017, there have been 2249 nature reserves of forestry institutions, with 126 million hectares of protection area which accounts for 13.14% of China’s land (Chart 5).

From 2011 to 2015, forestry in China has generated fruitful results, including 4768 items of scientific and technological achievements, 3659 pieces of authorized patent, 593 authorized new plant varieties, 909 national and industrial standards, 22 national science and technology rewards, over 500 improved varieties of forest trees promoted and over 1600 new tech items. The contribution of science and technology (S&T) to forestry reached 48% and the rate of commercializing scientific and technological achievements was 55%, demonstrating the remarkably enhanced supporting and leading role of S&T in forestry.

In 2016, S&T input from the central finance into forestry was 1.366 billion yuan, among which 490 million yuan was allocated to the special projects related to the national key R&D plans and to the research fund for public good industry. The 13th Five Year Plan on Scientific and Technological Innovation and the Scientific and Technological Innovation Plan on Major Forest Tree Breeding (2016-2025) were published to set the goal and direction for forestry S&T development and breeding innovation.

The establishment of scientific research institutes and their collaborating institutions in China is reasonable and they cooperate very well. All across China, there are 232 forestry scientific research institutes, 2296 forestry promotion agencies, 34 bureau-level key forestry labs, 23 forestry standardization committees, 179 positioning stations of terrestrial ecosystem and 26 national quality inspection centers of forestry products. Chinese Academy of Forestry (CAF) is a comprehensive, multi-discipline and public research institution that is directly subordinate to the State Forestry Administration (SFA). CAF is principally engaged in forest research of applied/basic sciences, strategic high tech researches, major nonprofit researches, technology development research and soft science studies. CAF consists of 19 research institutes and centers with independent legal entity, 13 institutes with non-independent legal entity, 20 co-established agencies, and over 60 institutions whose business is dependent on CAF. They are distributed in 24 provinces, autonomous regions and municipalities in the country.

In-service education and training are an important part of forestry education. SFA compiled the National Forestry Education and Training during the 13th FYP Period in 2016, and revised the Rules on the Implementation of the Education and Training of SFA Employees in 2017, to promote the information-based education and training, emphasize the in-service training of key personnel including the heads of local forestry bureaus, senior and intermediate forestry professionals at local levels, department heads and division heads of SFA and public servants.

The fund for forestry in China mainly comes from: a) state budget, namely the fund allocated to forestry construction and protection from the central finance and local finance, which includes basic construction fund and the fund going to forestry from state revenues; b) domestic loans, namely the money borrowed from domestic banks and non-bank financial institutions to fund the construction and development of forestry; c) foreign investment, referring to the foreign funds received for forestry of that year, including foreign loans, foreign investment in the joint venture projects, free aid, and the bonds and stocks issued towards foreigners; d) self-raised funds, referring to the fund received by forestry construction institutions from their supervising departments, local agencies as well as and enterprises and public institutions, for forestry development; e) other funds, including individual fund, donation and crowd funding. The recent years witness increase of investment to forestry in China. At the meantime, with the deepening of the market-based reform of China’s forestry, the proportion of private investment also increased. In 2016, the forestry investment nationwide was 450.957 billion yuan. Looking into the fund sources (Chart 6), we found out that 215.173 billion yuan came from the state budget (106.108 billion from the central finance, taking up 23.53% of the total investment), 34.832 billion yuan from domestic loans, 1.65 billion yuan foreign investment, 154.141 billion yuan self-raised fund, and 45.161 billion other funds. 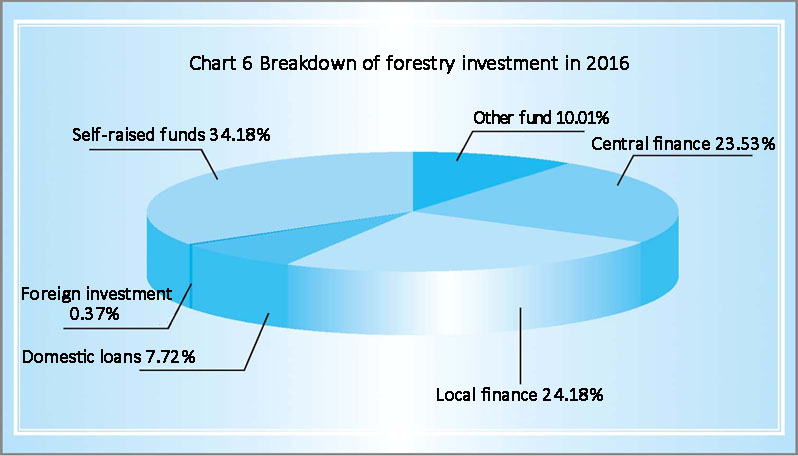 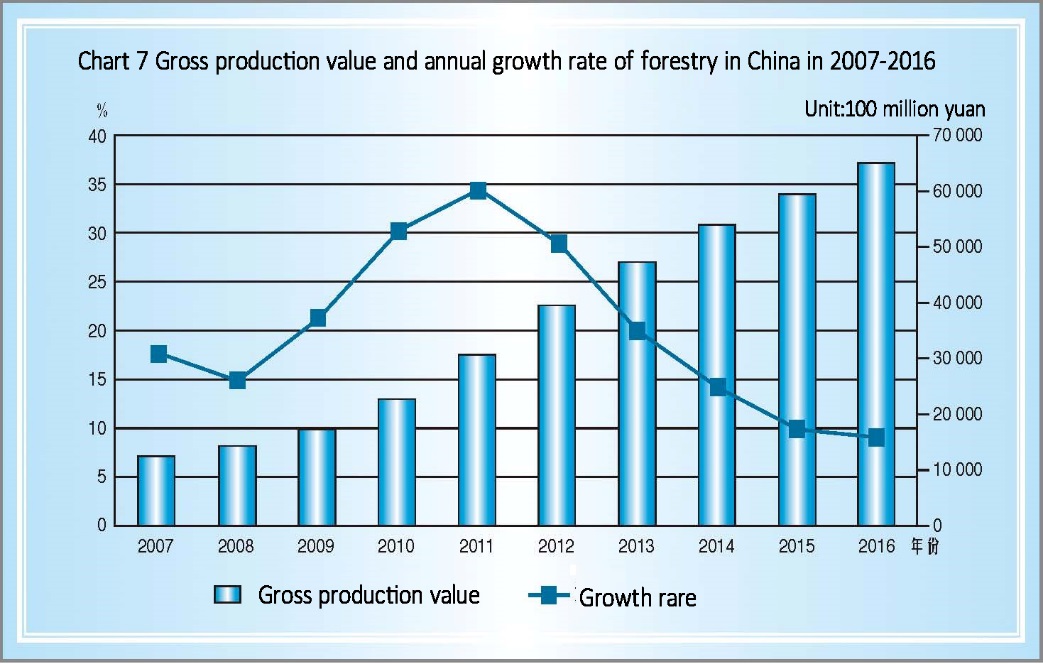 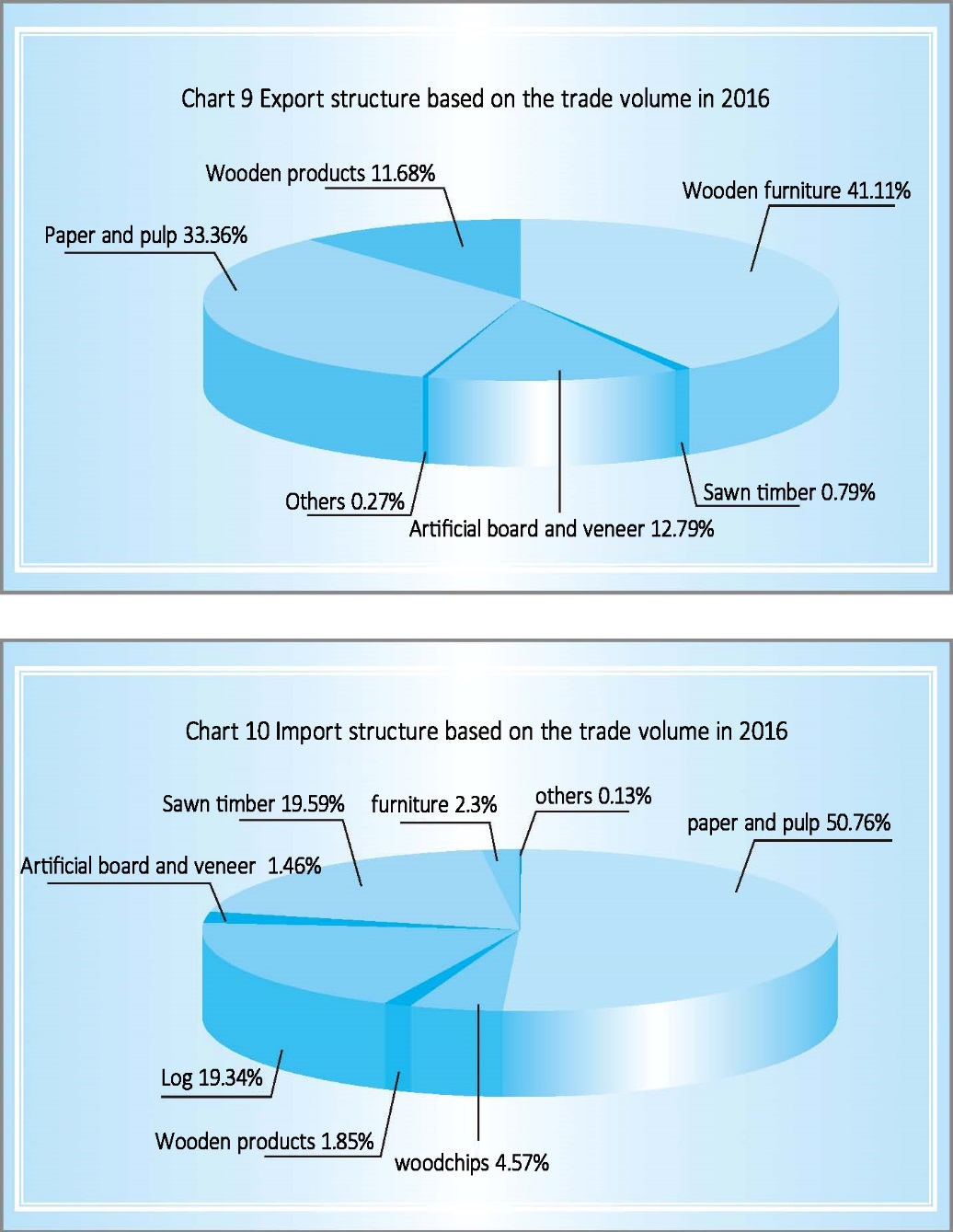